Off the Petal: Creating via Detours 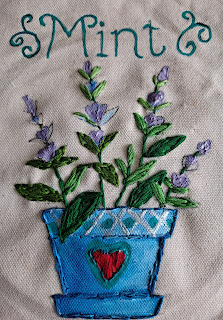 Sitting at my reorganized art desk going through accumlated bits of paper things, I found a small envelope of vintage iron on embroidery  transfers for herbs.
Canvas remnants out where I can see them. Floss bin where I left it. Needles in the wrap literally fell out of the cabinet at my feet. It was meant to be.
Embroidery, fabric paint and acrylic on cotton duck canvas is in progress for a book tote. The not fancy perfect homemade charm shines through. Plus, my embroidery skill is rusty. After each session, I remove the hoop so it doesn't pull apart or dent the thick plastic fabric paint. One side is mint, and the other is all leaves basil in an orange planter.
The detour,  moving around painting watercolors by taking a side route reorganizing my art desk to make it easier/have room to open laptop in order to see the photos I paint from. The cleared space is so very relaxing, I stay to create art there while the watercolor set up rests elsewhere. 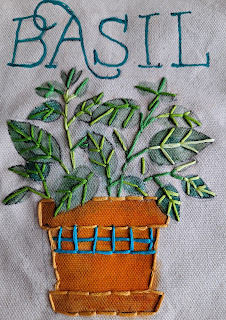 How is your week going? 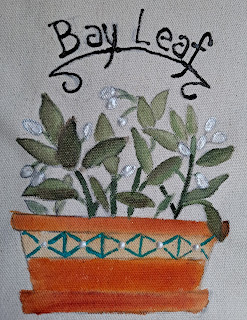 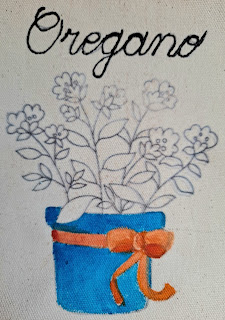 Painting is easier. Updating 24 July with the next motifs.
at July 22, 2021 29 comments:
Labels: artist's block, embroidery

Muggy Is As Muggy Is 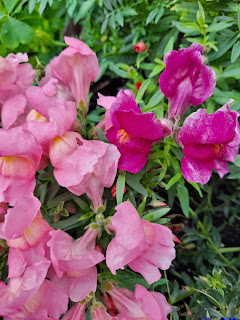 Just as I hear a noise on an exterior wall, the electricity goes off. At 8 PM EDT in the morning, the air is heavy muggy with a slight breeze.

There's a small outage* in the local area. (I heard the word squirrels mentioned.)

Windows and patio door open, the birds outside echo into the room. The good part is that the sky is overcast, blocking the hot sun.

Amazing to think as a child we had no air conditioning. Activity adjusted to staying in the shade, and using a fan. How the world evolves can be fascinating when the time line of progress is examined.

I'm reminded I need a new camp light to go with the flashlights. Not opening the fridge unless I need water. In the meantime, hello 1950s.

Are you well prepared for things that can go wrong? Do you have a portable phone charger? First aide kit? Emergency plan and numbers?

* Less than an hour electricity is back on.
I went to McD's anyway.
at July 17, 2021 30 comments:
Labels: electric outage, emergency plan, first aide kit, flashlight, muggy 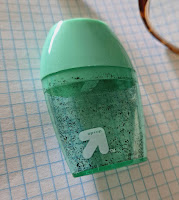 A thrift store find for twenty-five cents, by far is the best mini portable pencil sharper I have. The tip turns out perfect without breaking.
Made by up&up for Target Corp. (I bought another one.)
A  practice sketch for any painting eases anxiety. The watercolor practice can be tricky though, as I tend to focus on the different areas seperately. For example, the sky and ground perspective don't match the actual landscape scene (from a photograph). In the second or third sitting, I noticed my mistake. On scrap paper, a pencil sketch maps the landscape.
Scrubbing the watercolor  paper produced tiny  fiber rolls. Methinks I chose the wrong paper, a 90 lb. I bought for ink drawings. I've not experienced fiber bits on my favorite 140 lb. cold press Arches watercolor paper, that I can stretch, use a lot of water, and scrub away color with no problems.
Painting from a photograph without it in front of you can lead to quirky bits of discoveries. The colors are worked out. The cloud formations need more practice. A sketch for reference, done.
Overall, pushing myself to paint took all day. Each time I set out to paint, I had something else to do first. That evening, pressure off, a practice watercolor takes more pressure off. Feeling like the world will end if you accomplish something good for yourself is a difficult way to live. Practice paves they way to success.
at July 15, 2021 20 comments:
Labels: anxiety, determination, pencil sharpener, practice, watercolor painting 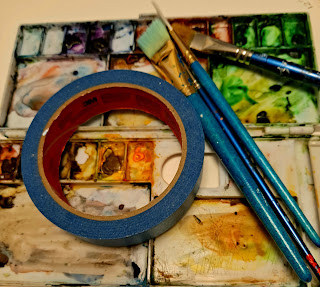 Rainy days mean no lugging the watering can to keep the flowers happy. (The exercise is good though.)
The rain also flows my thought into scenes queued for painting with watercolors. This blog will slow down for a week or so as I take time to tend my creativity.
at July 13, 2021 18 comments:
Labels: blog slow down, summer, watercolor

The opening of creamie/ice cream stands makes the season a reality for me, more than sunshine, the equinox and 4th of July combined. The scent of French fries at a roadside stand is a very close second.
After a month plus of knee pain, loosing weight also became a reality for me. Thus far, 10 pounds lighter, I select my treats very carefully as they are fewer, and getting farther between. Chocolate eclairs, done. Ice cream, done. Cannoli, not quite.
The first time, I thought the filling missing from the center of the shell was a mistake. The second time I discovered the cannoli half filled, I know it is not a mistake. How can any bakery in America sell a half filled cannoli!
Situations like this is one of the reasons why there is big government. If there was a bill to ban half filled cannolis in Vermont, then I would support that legislation.
Have you ever been surprised to discover  phony pastries?
at July 12, 2021 10 comments:
Labels: cannolis, French fries, ice cream, phoney pastries, summer
Older Posts Home
Subscribe to: Posts (Atom)